What’s new in this issue?

We published the new issue of the RC09 Newsletter.

ISA Executive Committee decided to postpone the IV ISA Forum of Sociology until February 23-27, 2021. Registration deadline for presenters has been extended to December 15, 2020.

“We cannot stress enough that you are all in our thoughts in this extraordinary period – across so many domains of crisis. Please stay safe and care for your families and friends so that we all make it through in good health and strong of spirit.”

“This Newsletter testifies for the large variety of interests of the members of the RC on Social Transformations and the Sociology of Development.
You can find new publications on health care access and global health; inequality and social differentiation in Africa; ethnicity and social movements; management in Africa and the Arab world; digital transformations and big data; democratization; and austerity.
Moreover, information is given on the Global Center of Spatial Methods for Urban Sustainability in Berlin, Germany. A new project Transformative Education for Climate Action is described as well as some short information is included on two PhD projects at the University of Rennes 2, France.
After the session update of the Brazil Forum, a description of a mini conference on “Decolonizing Development: Theories, Methods and Research” in Amsterdam in July 2020 is made.
At the end of the Newsletter, you can find an overview of Sam Cohn’s new website and twitter account on development issues.”
From Remarks of the RC09 Co-Chairs: Ulrike Schuerkens and Habibul Khondker

There is an open call for paper proposal to the international workshop “Institutional Transformations of Economy and Polity in Post-Communist States, 1990-2020 – Taking Stock, Looking Ahead“, which will be held in 15-19 June 2020 in Tbilisi State University, Georgia.

The workshop is co-organized by the Goethe University Frankfurt, Germany and Tbilisi State University, Georgia. It is funded by the German Academic Exchange Service (DAAD), which covers travel and accommodation costs for all invited participants.

The workshop “Institutional Transformations of Economy and Polity in Post-Communist States, 1990-2020: Taking Stock, Looking Ahead” puts a particular emphasis on experiences and challenges in the South Caucasus, yet of course also Russia, Ukraine and other former Soviet states are to be discussed. The workshop is set to discuss both theoretical and empirical studies on the following topics:

To explore these issues, the workshop draws on an interdisciplinary perspective on institutional analyses from all fields of the social sciences and beyond, involving sociology, political science, economics, business, history, anthropology, and geography, among others.

You can find more information about the workshop here.

The call for contributions – max. two page abstracts which may deal with theoretical, empirical or methodological aspects and can be written in French, English or Spanish – is open till October 6, 2019.

The deadline for submitting your abstract to one of RC09’s thought-provoking sessions is fast approaching. Submit your abstract online before 30 September 2019, 24:00 GMT.
Follow this link for the submission portal on the ISA website:

You will find the full list of the RC09 sessions and their abstracts here: 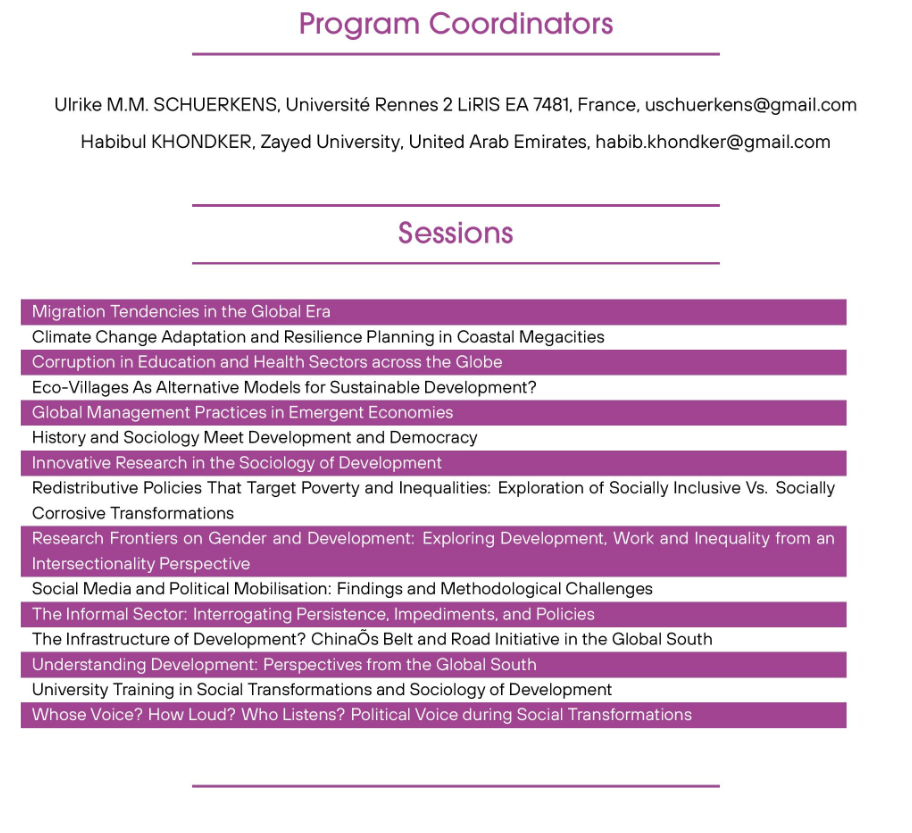 I first saw (but did not dare to talk) Immanuel Wallerstein at the World Sociology Congress in New Delhi in 1986. That’s like more than three decades ago. I was sitting in a hotel lobby with my PhD supervisor John Markoff, who wrote a review of Wallerstein’s The Modern World System (vol 1). Markoff pointed Wallerstein to me. I have known Wallerstein’s name by reputation and read some of his works in the late 1970s while doing my Master at Carleton University, Ottawa, Canada where my thesis supervisor Don Whyte was a follower of Immanuel Wallerstein and Andre Gunder Frank. Wallerstein’s The Modern World System Vol 1. was published in 1974. Carleton, like many other Universities in North America in the late 70s, was dominated by the Dependency paradigm of Andre Gunder Frank, Samir Amin, Furtado, Cardoso and others. In my Master’s thesis I used aspects of the World System Theories. In the mid-1970s, Wallerstein was teaching at McGill after his tour of duty in West Africa and a teaching stint at Columbia University. Immanuel Wallerstein was not an arm-chair sociologist. He liked to be in the thick of things. During the days of students’ unrest in the late 1960s he was at Columbia University as a junior faculty member supporting the students’ activism. After earning his PhD from Columbia University in 1959, Wallerstein went to Africa to understand the impact of colonialism in Africa. His research output was a book on Ghana and Ivory Coast. Starting as an Africanist and having familiarized himself with deep historical research in the vein of his intellectual guru, Fernand Braudel, Wallerstein developed the world systems framework by building on the Dependency framework and recharging it with a critical reading of Marx. Wallerstein was bold in his observations. While Soviet Union was an avowed socialist state, he refused to accept the possibility of a socialist system within the entrenched world capitalist system. In his world-centric framework, dominated by the logic of capitalism, the existence of other systems was not possible. His prognosis was not short-term, he argued that since capitalism is a historical system, it will decline in the long term, as all historical systems met their demise. But when? He was not sure. And what would replace capitalist system, here too he was not sure that it would be socialism, one possibility is a system yet to be named.

In his world system framework, rather than looking at the nation states, he analyzed the world system as made up of three distinct zones: the core (the developed North), the semi-periphery (in-between, transitional countries) and the periphery, the Global South. The functioning of the world system sometimes creates opportunities for the countries to change their position. Countries once core, for example, Portugal in the 16th century, became semi-periphery, and semi-peripheral countries too can become core in course of time. This flexibility in the world system analysis was deemed more empirically valid. Yet, his analysis was deeply political economic with little space for culture for which he was criticized. Wallerstein brought historical sociology at the center stage earning the respect of professional historians for his scholarly historical analyses. He added a new dimension to the study of social change, rescuing it from ahistorical model building. He established a distinction between Marxism, a political dogma and Marxist scholarship as a critical intellectual weapon. He chose the latter and became its vociferous spokesperson.

I had a conversation with him at the Montreal World Sociology Congress in 1998. Earlier I corresponded with him from time to time. When I asked for his permission to translate some of his popular writings in Bengali, he gave me a hug saying “sure, you have my permission”. To my question, what a young sociologist must do, he said: “read widely and learn languages”. Wallerstein’s magnum opus The Modern World System (in four volumes) has literally thousands of references and footnotes in all major European languages! During my sabbatical leave at Cornell University, in 2002 I also included Binghamton University where he headed the Fernand Braudel Center where I was given an office. I would drive to Binghamton once a week from Cornell to meet him and attend the weekly seminar. His historical knowledge was astounding. I mentioned to him that I wrote a paper in 1987 titled: The World According to Wallerstein, he immediately asked for a copy. I contacted National University of Singapore’s Sociology, my home base at that time, to mail a copy to him. In fact, he sent me several of his papers (published and unpublished) when I was writing that paper in Singapore, which was published as a Working Paper. Wallerstein’s contributions were not limited to historical sociology, he wrote important papers on global politics and international relations. His fortnightly commentaries were incisive and reflected his deep understanding of the global processes. In one of my conversations on the Middle East politics in late 2002, I asked him if Saddam Hussein steps down, will the US invade Iraq? To which, he replied: “Even if Saddam commits suicide on live TV, the US would still invade”. Barely a couple of months later, using the pretext of “weapons of mass destruction” the US forces marched into Iraq as bombs rained in illuminating the sky of Baghdad.

I met him again in Durban at the World Sociology Congress in 2006 where he teamed up in a panel with Samir Amin and Giovanni Arrighi where I asked the panel, almost in exasperation, what should be the position of an unrepentant Marxist scholar in a neo-liberal world where socialism is disappearing or, at best, moribund. The gist of their answer is not to give up hope in the struggle of the working people.

My last meeting with Wallerstein was in Yokohama, Japan in 2014 at the World Sociology Congress, where we chatted for a while and posed for a photograph (snapped by a Japanese sociologist). Wallerstein was once the President of the International Sociological Association where he started a trend of writing a Presidential letter to fellow sociologists. His work on the rise, spread, and possible demise of the capitalist world systems will remain an inspiration to the scholars in historical social sciences. Wallerstein was conscious of the limitations of the “really existing” social sciences living in splendid isolation. He proposed an uni-disciplinary approach that he called historical social science. Had there been a Nobel prize in sociology, he would have been a laureate. A scholar extraordinaire, a public intellectual, and a humane person, Wallerstein will be sorely missed by his colleagues, friends, and students. He was the teacher of an entire generation, a paradigm-builder and an optimist.

Immanuel Wallerstein passed away 28 days shy of his 89th birthday on August 31, 2019. As a global public intellectual, he started writing his commentaries in 1998 and wanted to continue until it reaches the 500th issue, which was published on July 1 2019. In that issue, he wrote: “No one lives forever.” Wallerstein titled the last issue: “This is the end; this is the beginning”. For those whose sociological imaginations were rekindled by his contribution must carry on the torch of knowledge for the emancipation of humanity. 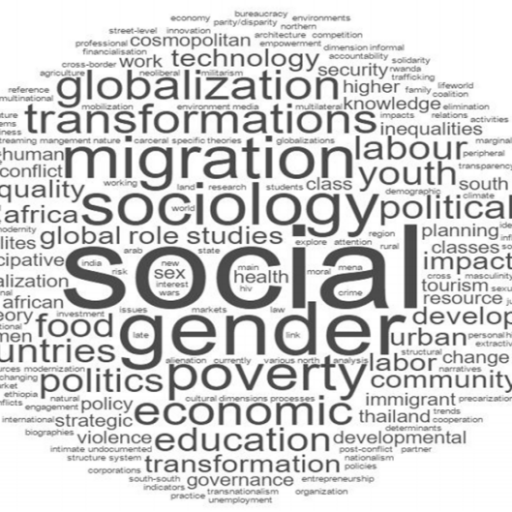 The RC09 Executive Board 2018-2022 has been elected!
We congratulate Habibul Khondker and Ulrike Schuerkens who continue to be the RC09 Co-Presidents! Rc09 also has a new Secretary/Treasurer Brian Dill and a larger team of website and newsletter editors – Ilona Wysmulek, Almendra Orbegoso, and Devparna N. Roy – honored and excited to serve the RC09 community of scholars! The newly elected board members are Samuel Cohn, Joshua Kjerulf Dubrow, Tamara Heran Cubillos, Hasan Mahmud, Dieter Neubert and Victor Roudometof.
Looking forward to a fruitful and exciting 4-year period filled with new activities!
Read more about the RC09 Executive Board, its members or join the network.

We are pleased to publish our Spring/Summer 2018 Newsletter, prepared by the RC09 newsletter editor Zophia Edwards.
This edition contains:
– Remarks from the RC09 Co-Presidents
– Recent RC09 Member Publications
– Book Review
– RC09 Members’ Ongoing Projects and other news
We especially thank our members who contributed to this edition.

The Research Committee on Social Transformations and Sociology of Development RC09 strives to represent sociologists interested in the study of social transformations and development around the world, regardless of their theoretical persuasion, methodological approaches or ideological perspective. More about the International Sociological Association here

The Research Committee of the International Sociological Associatio
Blog at WordPress.com.
Loading Comments...